Surfline reports… A Week Of South Swell Lining Up For NSW

It was almost flat for a week, that’s all about to change 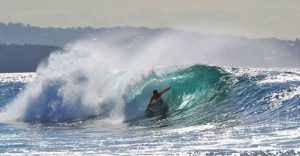 The pretend flat spell wafting along the NSW coast for most of the past week is about to break, in a return to semi-winter conditions.

The catalyst is a slow-evolving low pressure system setting itself over the eastern Tasman Sea, giving rise to a multi-staged swell event that should see us right through to the end of next week.

Commencing with a modest spike in short period S swell from Newcastle south on Sunday, the first stage really comes to a head on Monday and Tuesday. Consistent, short period S/SSE swell and fresh SW/S winds will lend the focus to semi-sheltered southern ends for a half decent wave – probably nothing to write home about, but a good step up from this week’s run of tiny NE wind-swell.

The second stage is shaping up as the meat and potatoes of this episode. This phase hinges on gradual intensification of the low as it hovers off NZ’s west coast, generating a compact belt of low-end SE gales off the South Island on Monday. Going on Monday morning’s model runs, we should see a well overhead, mid-period SSE/SE swell push up the entire NSW coast mid to late next week. It’ll be packing enough size and period to penetrate southern Queensland at a fun size to boot.

…and the Wednesday, way broader and more solid.

For now there’s still plenty of spread in forecast wind-speeds keeping projected surf-height and period pretty loose – but those numbers will invariably tighten up over the next day or two. Watch your regional forecast updates for more on this phase.

Beyond that a third and final pulse of mid-period swell hangs on yet another burst of low-end gales setting up across the storm’s lower flank, this time aligning ESE across the eastern Tasman Sea early to mid-next week. If all goes to plan, clean, well-organised SE/ESE swell will open up the best day of the week next Thursday, August 11, followed up by smaller and still clean ESE leftovers on Friday. Again, stay with the forecast updates to check on this through the coming week.

Early Monday winds, sloping off at a SW angle for a lot of NSW…

…and turning lighter and more flat southerly on Wednesday.