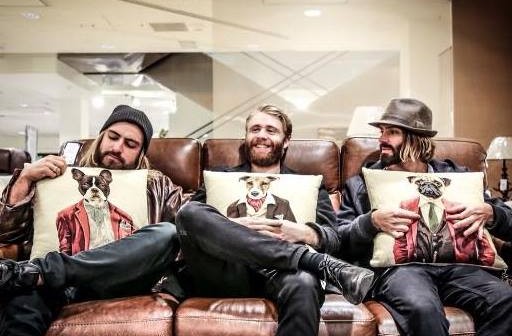 It all began one New Years eve a couple of years back, deep in a rainforest gully up a long windy road on the NSW’s South Coast…….. It was shaping up to be a HUGE night and anticipations were high. The house in the hills was bracing itself for the ride of its life!!!! The Jaspers shack was always alight with activity. A healthy flow of people were consistently retreating inside its homely walls. Luke (KEYS) grew up in this house. He skinned and hung rabbits from the porch as a boy and still does today. His rabbit stew is TO KILL FOR. Joe (DRUMS/VOX) lived here at the time along with a couple of other lads, Bogan and Mr Felix (Fritz). Lets just say that was the best year of our lives. Fritz and Bogan used to cook up massive feeds and we all just jammed, drank, ate, talked crap and laughed our lives away. The preparations were in full swing. Tipi’s were being constructed by the creeks green flowing banks, the fridges and Eskies were being packed full of liquid all sorts, fires were being lit in every corner, instruments were conveniently placed around for all to grab and strum, bang, blow or ting on and Bogan and Fritz danced on the roof in nothing but a pair of leopard print underwear. Yeah it was a bit like Burning Man ;). An influx of mates started rocking up and the party began. The main jam room in the lounge room was a-blaze with “jammers” busting out on the array of drums/percussion, guitars and the piano/keys. It was pretty loose to begin with but as the night went on it grew louder, louder and more looser. For the most part it probably sounded like a kindergarten music class, but the more we drank the less it mattered. With people coming and going so frequently it was always interesting no matter how crap it sounded. The room was like musical chairs, if you stood up off your instrument for a second, someone would grab that chair from right underneath you and just start smashing away at whatever was there. Things were pretty sloppy, but it must have been around 4am when Joe sat behind the drums and started a groove up… The “Jammers” were fading fast. The slick Matt Unwin (GUITAR) waltzed into the room with a grim smirk and began to bellow out some psyched out riffs on top of Joe’s groove. “He came out of nowhere” Joe said, “Hadn’t seen him before in my life before tonight and earlier tonight i only saw him trying to play a harmonica and failing miserably, but this guy can play the guitar”. Luke soon heard the cries from a far and came flying through the door like Kramer from Seinfeld. We must have jammed til 10am. And so it began…. DOS/ENOS was born. Three wild ruffians from the beautifully rugged south coast of NSW. Just finished recording our first release “Nick Pratt” which is part of our upcoming EP. which we are looking to release over this next month. All tracked where it all began at the Jaspers shack in the lounge room. Keep those eyes and ears open! See you all very soon. GIG DATES: RAD BAR WOLLONGONG-26th AUGUST FRONT BAR CANBERRA- 30TH AUGUST