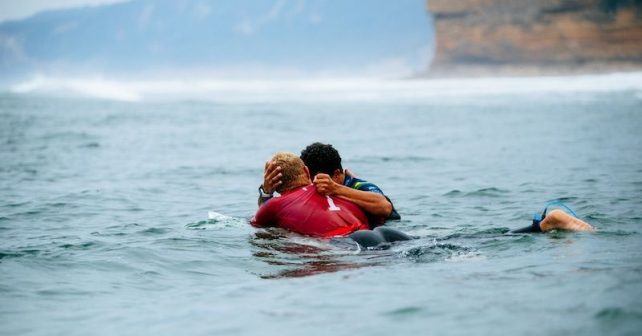 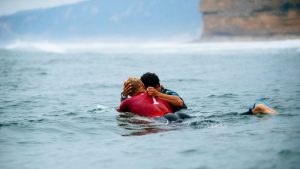 THE END OF THE ROAD

This morning at dawn the hills behind Bells and Bob Johnson’s farm resembled a scene from War of the Worlds. Mums and dads and small children sprinted in panic down the hill as if being chased by Martian tripods. They were, of course, simply late for Mick Fanning’s quarterfinal. Around these parts it was a big deal, and as people were trampled in the stampede it appeared Mick’s imminent retirement meant more to them than it did to Mick himself.

They could have run yesterday.

It pumped all morning, three foot and with a giant H sitting above there wasn’t a single cloud or breath of wind. They rolled the dice for stronger swell and something that felt more like Bells, and as the survivors of the stampede made it down to the beach this morning, Bells is what they saw. Gun barrel grey and stacked as far as you could see.

Owen Wright slept in his car last night, a throwback to his junior years when he slept in the back of the car every time he came to Bells. Drawn against Mick this morning he was in an awkward spot. They all were. No one wanted to be the asshole that knocked Mick out of his last event. Mick’s retirement was the emotional tide floating this whole event. Driving down Bells Boulevard this morning we listened to a playlist of Grinspoon and Tool, Fanning anthems, just to channel the bogan gods of world titles past and get ourselves in the appropriate frame of mind.

Overnight a fresh shift of Coolangatta guys had flown in.

Replacing the Hazzas (who’d done the early shift) were Toneza and Fuckface, fresh troops ready for tonight’s party. Taylor Knox was still there. At 8am this morning he asked, “Is it too early for a beer?” Also coming in last night was Mick’s first (and last) coach Phil McNamara. Phil coached Mick at school then coached him to his last world title, 20 years later. Mick’s mum still manages him. That there says plenty about Mick himself.

Owen and Mick sat there. The waves had slowed. “They’ve got no choice but to be choosy,” offered Nick Carroll. Mick chose the wrong one that turned out to be the right one. It was hard even from the beach. Maurice Cole pointed out 50 “windmill waves” – Rincon sets up the point that broke in line with the old windmill – that nobody even contemplated.

I was working on the beach commentary with Reggae Ellis, who was celebrating his 30th anniversary of calling Bells. He was wearing his traditional green finals day flannelette shirt, the same one he’s worn every year for a decade now. I told him the story of “Joffa”, a crazed Collingwood football fan who ceremonially dons a sequined gold jacket for the crowd when he thinks Collingwood have got the match sewn up. I suggested Reg should do the same for Mick with the green flanno. The rest of the crew on site were already donning “Cheers Mick” shirts and hats, so many that they needed to reverse a giant truck in and restock the merch tent, that had been cunningly disguised as the only exit from the event site.

Watching Zeke Lau warm up for his quarterfinal with Italo Ferreira I said a silent prayer that he’d win and be drawn against Gabe Medina in the semis. I wanted to see how the aggro Zeke applied to John John earlier in the contest would work against Medina. The two most combative surfers in the draw, would they paddle each other to Anglesea, or simply try and choke each other out?

Turns out it never eventuated, because Italo paddled out and tore Bells – and Zeke – into tiny little pieces.

Italo Ferreira takes out the 2018 Rip Curl Pro at Bells on an emotional day of surfing. Photo: WSL/Sloane

It seems like pretty much everyone else had been surfing uphill in this contest, but not Italo. He’s got this weightless transition where he can just skip between sections, then simply turn toward the sky and explode. Sunny Garcia had the same ability out here, just on his forehand.

Glen Hall, after watching a series of lame heats a few days ago, had made a bet that if anyone managed a heat total of 18 he’d run up and down the Bells stairs in the nude. Italo was on 17.84 after five minutes. Hall looked nervous. It was cold. There were cameras. But he needn’t be. When he retired a few years ago his party shirts had the number “25” printed on the back. On the back of his shirt someone had written “cm” after the 25. Read into that what you will.

I watched the first women’s semi with Dog Marsh. He’s a Cronulla boy of course and grew up with Occy, and he watched 16-year-old Caroline Marks go upside-down three times in the Bells Bowl, there was only one comparison he was going to make. He called her “Baby Occ”. That girl is next level, and it took Steph to find another gear in the Bells Bowl to get past her.

Mick Fanning walked past us, getting ready for his semi with Pat Gudauskas. As he was getting changed he was in some kind of trance, with some kind of Gregorian chant or Tibetan throat singing coming from him that sounded nothing like Grinspoon. I think at this stage, the notion of him winning his last event on tour suddenly became very, very real.

Pat Gudauskas had out-enthused everyone he’d surfed against this week, and thoroughly deserved a place in the semis. This event sorely needed his positive vibes, but he was never going to get past Fanning, who by this stage was starting to look like the Mick Fanning of a few years ago for whom pro surfing meant the world.

The danger however lurked in the bottom half of the draw.

Between Gabby and Italo, one of them was going to be entirely comfortable crushing Mick’s pretty little picture today. Gabby had done it once before at Pipe, and Italo, eating a banana, well he looked ready for war. Standing nearby and at the end of a long narrative about some tale in a faraway land, Maurice Cole summed up Italo’s current mood by saying, “If you’re not a pirate, then what are ya!” Italo and Gabe paddled each other around to Southside, but when they returned to sanity (and the Bells Bowl) it was Italo who looked the pirate.

The women’s final between Tatiana Weston-Webb and Steph Gilmore paddled out to AC/DC’s Hells Bells. It doesn’t really resonate as a feminist anthem, but for the owner of a couple of dozen electric guitars, it was only ever going to fire Steph up. And she kinda needed it, otherwise she starts hearing folk guitars and does this thing where she seems content to just sit there, cruise across a couple, and get lost in an Andrew Kidman movie.

Maybe it was the fact that Mick was surfing one last time, and the prospect of the pair of them winning Bells together that lit a fire under her. One commenter on the Bells stairs who’d been lamenting the state of Australian surfing suggested they needed to go one step further than winning Bells together and begin work on some kind of surfing master race.

When Mick dropped an eight at the start of the final the crowd dared to dream.

The waves by this stage had slowed and were crumbling under the hand of a light sideshore. But after losing finals before, Italo wasn’t going to let sentimentality or the scoreboard stop his roll through this event. He’s been dynamite all week, and in two waves dropped two gears and cruised past Mick. In Bells finals past this simply would have been a cue for Mick to conjure up a pair of nines from the Southern Ocean, but in recent years it seems like Mick has used up a whole career’s worth of luck, not least of all when he was spared from the jaws of a giant South African fish.

As Mick sat there, we jabbered on the beach commentary and I made a comment that he only had three minutes left in his pro surfing career. In retrospect, I don’t think that helped, as I immediately started thinking of the enormity of his career – the heats, the wins, the faces – and I think Mick might have also. And just three minutes of it left. No sets came, but he didn’t chase anything inside. That would be too undignified. He simply sat there and soaked it up.

When the hooter sounded, Italo paddled over and embraced Mick, both overcome in very different ways. It was symbolic. Mick was leaving the sport because winning these things long ago stopped having any real meaning for him. But for Italo, this win, his first, meant everything. Italo flashed gangster hands and a huge smile to the crowd, claiming it all the way.

After embracing family and friends walking up the stairs, most of who had shed a tear or two in the dying minutes, Mick walked into the surfer’s area and in his loudest voice, bellowed, “McMuuuuuuffffffiiinnnn!”

McMuffin, for those late to the party, is Mick’s new alter ego, a renaissance version of Eugene if you will. McMuffin drank beers with his crew and is presently en route to Torquay McDonalds for lunch, from where he’ll walk into a local pub full of friends and family and toast one of the more remarkable surfing careers.