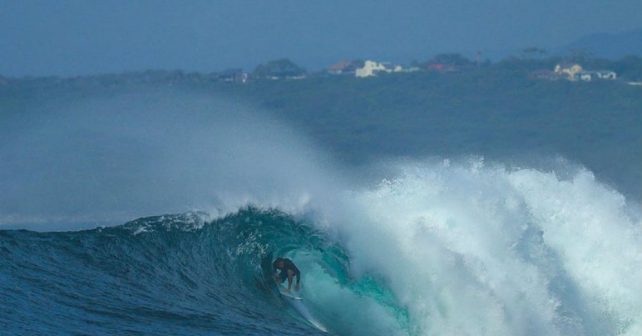 You could say the image below is a fair representation of what can happen when an East Coast Low drops off the NSW coast. Between the months of May and October it’s not unusual to see at least one – if not several deep East Coast Lows impacting our swell window; invariably wreaking havoc on the coastal fringes before turning big, stormy sea-states into gold as winds finally swing offshore. As far as the current, complex ECL taking shape goes, well, it’s probably not that guy – but that doesn’t mean there won’t be some big, powerful waves on tap as the system develops offshore this weekend.

The epic surfing conditions that often result from an ECL probably won’t manifest with this kind of quality – but it will produce consecutive days of powerful surf across the NSW coast. Photo: Uploaded by Pat Pombart.

Overview
An impending, steep increase in S swell setting in this weekend is linked to a complex amalgamation of low pressure systems currently located over Bass Strait and Tasmania. The system is set to coalesce into the deep East Coast Low off the southern NSW coast within the next 24 hours; initially triggering a steep rise in S swell across the southern half of the NSW coast throughout Saturday and Sunday, ahead of a second, potentially larger round of SSE swell hitting on Monday.

A complex low enveloping Tasmania shifts east overnight and intensifies offshore; wreaking havoc along the southern half of the NSW coast this weekend. Source: BOM.

Southern Corners Will Be The Pick
It’s also clear that both pulses will be accompanied by strong winds; potentially starting out WSW as the swell begins to kick on Saturday morning before turning SW/SSW at strength during the day. As the low moves further offshore on Sunday and Monday winds will tend more SSW to S; thereby lending the focus to sheltered southern corners and north facing breaks on both days.

The possibility of offshore WSW winds on Saturday morning could offer up a great window of opportunity before conditions get out of control during the day. Source: BOM.

At this early stage there’s enough divergence in the models to lend considerable uncertainty to the precise timing and size of Saturday’s initial increase. Based on GFS and ACCESS model runs, the building trend will be derived from dual sources associated with the same storm; the first being a gale force SSE/SE fetch developing across the low’s southern sector, east of Tasmania on Friday. The second is a more localised, but similarly strong, 30 to 40kt SSW fetch extending up the South Coast as the low tracks northward, parallel to the coast on Saturday. If this proves accurate, we’re looking at a phenomenal spike in S swell; building from something in the vicinity of 3 to 5ft across Sydney’s southern exposures at dawn towards 6 to 8ft+ mid morning and on to a stormy peak of 8 to 12ft+ into the afternoon and this will also maintain heavy surf across the region on Sunday.

FOLLOW THE EVOLUTION OF THE ECL ON THE WAVE TRACKER

Latest model runs are picking up a phenomenal spike in S swell across Sydney and surrounds on Saturday, but continued variability in model guidance could see some downgrading over the next 24 hours. Source: Wave Tracker.

In contrast, EC modelling plays down these developments; indicating the low won’t be so intense as it moves north. This suggests both fetches will be lower in strength and small in size; thereby resulting in a still large, but not off-the-charts increase throughout Saturday; speculatively peaking in the 5 to 8ft range. This variability between models is indicative of the unpredictable nature of ECL’s – and it’s something that’s likely to persist even as the system begins to intensify offshore later Friday. We’ll be watching the models closely over the next 24 hours so stay tuned for updates as the system develops.

Second SSE Pulse Hits on Monday and Tuesday
However Saturday’s initial increase plays out, it’s clear this will just be the first of two, powerful pulses derived from the ECL. The models loosely agree the ECL will track eastward on Sunday, taking it deeper into the Tasman Sea throughout the day. As this occurs the system will maintain a broader belt of low end SSE gales across the southern Tasman Sea. This larger fetch area would endure for a longer duration thereby; setting up another larger push in mid-period SSE groundswell for Monday morning.

Monday’s second pulse will be carrying longer periods and will also arrive from a SSE direction – again making for large to heavy surf across the region all day. Source: Wave Tracker.

Going on GFS modelling, this is again shaping up as a heavy and better organised swell; generating 8 to 12ft plus surf along more exposed beaches and offshore reefs before slowly easing from there. The direction and period would also see very large surf along all open beaches, so even the most sheltered southern corners would be offering up challenging conditions.   Once again, corresponding EC model runs play down the strength of the fetch – but this time to a lesser extend – so it’s clear a large or heavy SSE pulse is likely.

Further North
It’s clear that both northern NSW and southern Queensland coasts are only indirectly exposed to both stages of the ECL’s development – and hence these regions will see a diluted version of the swell; loosely peaking in the 4 to 6ft range across northern NSW southern exposures later on Sunday/ early Monday, while wrapping at much lower levels elsewhere owing to the acute deepwater SSW direction. The second pulse, arriving on Tuesday, is looking larger both north and south of the border – for more on this check the detailed forecast here.

The mid and northern NSW coast’s oblique exposure to the swell-source will see more accessible S and SSE swell arriving across the region over the weekend and early to mid next week. Source: Wave Tracker.