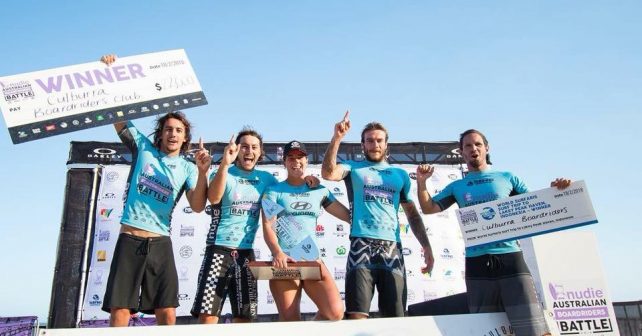 From the pages of the Newcastle Herald, here’s how it went down…..

With his big brother missing, Mikey Wright brought Culburra Beach back from the brink before pipping Merewether at the post in a thrilling Australian Boardriders Battle grand final at Newcastle beach on Sunday.

Culburra, featuring Wright and his sister, two-time world champion Tyler Wright, looked out of contention after bowing out of the teams section on Saturday.

However, Mikey, filling the void as Culburra’s No.1 male surfer with his brother and world No.6, Owen Wright, a no-show, won three heats in the skins division, held in damaging 10-foot surf, on Sunday morning, to give his club hope.

They finished fourth on the pointscore, prompting some members to be rushed back from the airport, for their shot at the title against North Narrabeen, Merewether and North Shelly in the one-hour culmination to two days of skins, women’s and teams events involving 24 clubs.

In powerful swell, the decider came down the last five minutes and 30 seconds when final hopes Wright and Merewether’s Jackson Baker, who could both catch only one wave as their club’s power surfer, hit the water together with Culburra holding a 0.61 advantage.

Baker made sure he avoided a five-point time penalty, sticking a two-turn ride before getting back to the change-over area with under two minutes remaining.

Wright caught his wave with 53 seconds left, pulling off two big turns before a desperate 14-second sprint up the beach to cross the line just as time expired. Judges deemed he made it in time despite replays casting some doubt on the call.

Wright was a deserved winner of the Wayne Bartholomew Medal for the best performing male surfer at the national final.

“I had no watch on so I didn’t know how long was left,” Wright said of his last-minute clincher.

“But then when I took off, I heard them say 53 seconds, so I knew I could surf the wave and still get back to the beach in time. I knew when I got to the beach and took my leggie off that I had to run and put in the hard yards.”

Wright said it was a special win for the Culburra Beach club, which was formed in 2014. The rest of the grand final team was Jordy and Ty Watson and Jordan Dank.

“It’s only been running for a couple of years now and to come away and win one of these is amazing,” Wright said. “We’ve been a bit unlucky in other years, and for this year, to get back in on points after surfing this morning, and to come away with the win, we’re stoked.”

Ryan Callinan won three skins for Merewether on Saturday and helped them take out their teams quarter-final on Sunday. However, he was rested for the semi-final and the preliminary final because of a knee injury.

It was Merewether’s best result in the event, after two thirds, and coach Luke Egan said “everyone on the team put in a stellar performance”.

“We lost but it was something out of our control, Mikey Wright’s was just a stellar performance,” Egan said. “That was textbook.

“It’s awesome for the team. This is the best we’ve ever done in it and we’ve done it at home so you can’t ask for much more. We even rested Ryan because he’s got a wobbly knee and we still got there, so we can’t complain at all.”

Egan praised the efforts of Baker, who surfed the skins on Sunday and filled in for Callinan as the club’s power surfer, who competes twice in the teams heats.

“It seemed like the more pressure we put on Jacko, the better he went,” Egan said.

STAR POWER: Tyler Wright in action for Culburra on Sunday.

“We were working out that the more we ragged on him to do good and go hard, he did better.”

Stalwarts Mitch Ross and Travis Lynch were also standouts for Merewether, who finished third on the pre-grand final pointscore.

“You just know you can count on them in the middle there,” he said.

“They’ve done so many of these. You know if we need time, they will make it up and if we need a big score, they’ll get it.”

Baker was happy with his performance.