Breaking: The WSL Will Finish The Margarets Event At Ululwat 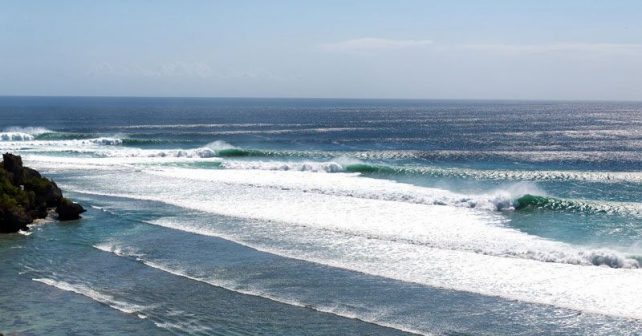 Look! A left! Uluwatu on the island of Bali. Photo: WSL

In news no-one saw coming, the WSL has announced this morning that the cancelled Margaret River Pro Championship Tour event will be finished at Uluwatu, Bali in June.

The Margaret River Pro was of course cancelled mid-event last month amongst controversy following two shark attacks in the area. The WSL indicated in their official statement at the time that there was a chance they could finish up the event at a later date and/or at a different location, but that possibility was openly dismissed as an extremely small chance of becoming a reality by most surf media (including us!). This morning, the WSL delivered on that idea with one of the world’s best and most iconic lefthand breaks, while also fulfilling the Championship Tour’s need for a long rippable left in its schedule.

The Uluwatu replacement event will feature the field of CT surfers who were not yet eliminated from the Margaret River Pro at the time of its cancellation (24 men, eight women).

It will be run withing 48 hours of the conclusion of the Corona Bali Pro, 2018 held at Keramas, which in turn is scheduled from May 27 to June 9.

So, after not having had a CT event on the island of Bali since the one-and-done Oakley Bali Pro held at Keramas in 2013, we are getting two in 2018. Wild.

This, however, is a temporary fix to Margarets and the shark problem that cancelled the 2018 event of the Margaret River Pro, with WSL CEO Sophie Goldscmidt confirming that we wiill be returning to WA next year.

“The cancellation of the Margaret River Pro was due to unique circumstances this season and we look forward to returning to Western Australia in 2019,” she said.

The WSL’s announcement also had statements from Lakey Peterson and Owen Wright, stoked with the news:

“It’s fantastic that the WSL is finishing this event,” Lakey Peterson, current WSL No. 2, said. “We love Western Australia and it’s unfortunate what happened to the event this season. That said, Uluwatu is an amazing wave and the surfers are very appreciative of being able to finish the event and have a fairer crack at the WSL Title.”

“I love Western Australia and I’m looking forward to coming back in 2019 but it’s awesome that we’re going to complete the event this season at Uluwatu,” Owen Wright, current WSL No. 4, said. “It’s a high-performance wave and I’m frothing to get out there. It’s great that the WSL is investing in completing the event’s competition.”

Sheeesh, this an exciting little turn of events, no? And all we have to do is get through the Oi Rio Pro, which starts tonight, and we’ll have two events in pumping Bali waves?! Alright, alright, alright!

Idea: can we send some sharks into the line-up at Saquarema and get them to finish that event up at P-Pass? That’d be sick, thanks!

Till that happens, let’s watch some Morning of the Earth.