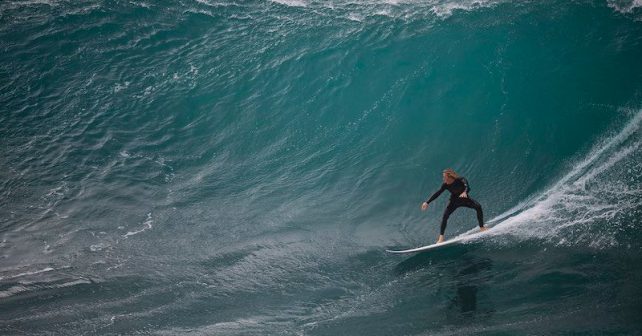 Following the exceptionally large and consistent run of SSE, SE and ESE swell that impacted the entire East Coast throughout the week of Monday July 13, you’d be forgiven for thinking the heaviest swell events of the 2020 winter have come and gone. You’d also be wrong.

A deep upper level low and associated surface trough moving across the Eastern States on Friday and Saturday is now widely forecast to induce a deep East Coast Low; initially forming just east of the NSW/ Queensland border on Sunday, prior to rapidly intensifying and tracking south on Sunday.

Largest surf potentially confined to mid-southern NSW coasts: Over the last day or two the key models have converged on these early-stage developments – and that’s now lending high confidence to yet another large to heavy swell event, primarily impacting the mid to southern half of the NSW coast early to mid-next week.

Initial building trend in ENE swell sets in on Sunday: Unlike last week’s storm, the initial fetch-area develops in conjunction with a large, slow-moving high-pressure system located over the south-eastern Tasman Sea (high pressure was located southwest of last week’s low). That initially sees a broadening 30 knot NE/ENE fetch developing across the high’s the north-western flank on Sunday, strengthening to 30 to 40 knots as the low drifts slowly south, becoming centred somewhere off the Seal Rocks to Sydney stretch on Monday.

Large to heavy round of combined NE/East swell and strong SSW, Southerly winds possible on Monday: While there’s still some fine differences among the key models surrounding the alignment and strength of the developing fetch, it presents high confidence for a very large to heavy pulse of NE swell peaking Monday, with a steady transition in swell-direction to the ENE/East occurring throughout the day. Further, the swell would arrive under strong to near gale force SSW winds; potentially gusting up to 30 to 40 knots as the low continues on its poleward track; passing within 200 nautical miles of the Newcastle to Sydney stretch on Monday.

When it comes to Monday’s forecast size, recent WW3 runs appear to be lagging. Given the forecast location, strength and duration of the developing fetch, ENE swell looks like ramping up steeply; perhaps around 4 to 6ft+ early on Monday towards 6 to 8ft+ during the day – potentially on to peaks of 8 to 10ft+ or more in the afternoon – whether or not it will hit this calibre isn’t set in stone. These specifics are likely to shift as the models continue to nail down the low’s lifecycle over the next couple of days, so stay tuned for updates on Friday.